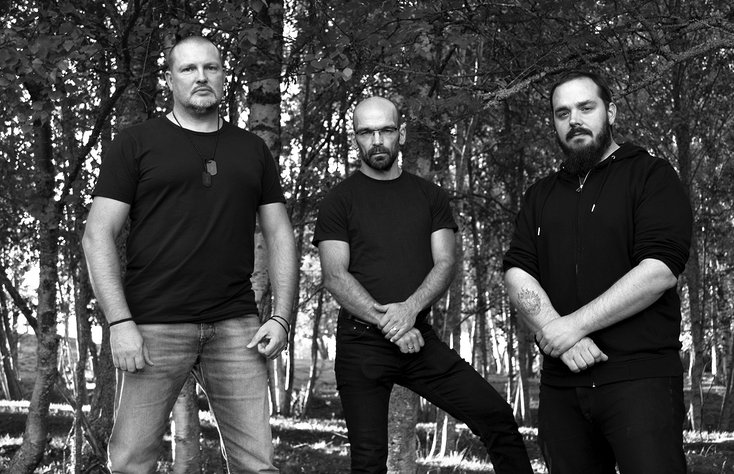 MORTALICUM from the northern parts of Sweden (Sundsvall) was formed in early 2006 by Patrick Backlund, the mastermind behind QUICKSAND DREAM, an obscure epic heavy metal band that started out in late '80s. Initially MORTALICUM was more of a studio project of Patrick who wrote and recorded several songs during the first two years, songs on which he did all the instrumental tracks. During that time Robert Wiklander joined to handle the vocals for the demos, but he actually had done some drumming on the first few jam sessions too. Many different songs were recorded and tried out both during the jams and as demos. Those demos were never released, but since many songs were shared and welcomed on their MySpace page, they felt that they were on the right track towards creating their style of doomy heavy metal mixed with some classic hard rock.

At the end of 2007 things started to happen as two more members joined the band. Two guitarists, Henrik Högl (lead) and Mikael Engström (rhythm) joined Patrick and Robert, but Mikael had actually been in the background of MORTALICUM since the very beginning and was also around during the early jam sessions back in 2006. In the beginning of 2008 the final piece of the puzzle was put in place when the drummer Andreas Häggström joined. Later that year, in September, the band debuted live. This show was also recorded and bootlegged as the "Live and Heavy" - live at Pipeline.

In spring 2009 some changes occurred within the band and they parted ways with the vocalist Robert. Instead, Henrik was chosen to do the vocals, mainly because the band wanted to focus on the heavier and more melodic side of their style. After the line-up change MORTALICUM performed a couple of live shows during the summer and autumn. The last gig was the highlight when the band played together with GRAND MAGUS.

At the the end of 2009 MORTALICUM started the pre-production of their full-length debut "Progress of Doom". Well prepared, they entered the studio in November 2009 and recorded the album in just a few days. The band put one song off their forthcoming album ("Into the Night") on their MySpace page and that one song was enough to grab Metal On Metal Records' attention. Upon hearing the whole album, no doubts were left on the label's part and soon the record deal for the release of "Progress of Doom" in April 2010 was signed. The debut album, recorded practically in 2 days, live in the studio, offers infectious and groovy tunes rooted in '70s rock and '80s metal with fine, classy lead work, crushing doom riffs and warm, organic production.

In the beginning of 2011 MORTALICUM started writing new material and decided to record and offer one song, "Black Flame (The Sinister Priest)", exclusively for the "Compendium of Metal Vol. 4" compilation CD released by Metal On Metal in April.

In February 2011 the band did a small tour in UK together with IRON VOID, THE PROPHECY and label-mates NOMAD SON, including performance at the Doomsday IV festival in Wakefield on Feb. 12th.

During the second half of 2011 MORTALICUM spent a lot of time working in the studio with the pre-production and recording of their second album entitled "The Endtime Prophecy". The CD was released on April 27th 2012 through Metal On Metal Records. They also recorded 4 bonus tracks and included them on a self-released cd-r. This is a limited edition, numbered 100 copies, is only available directly from the band.

In November 2012 MORTALICUM played at the Malta Doom Metal festival, where they shared the stage with THE BLACK, DAWN OF WINTER, FORSAKEN, HOODED PRIEST, CHILDREN OF DOOM, TETHRA and others, and they also did an extra club show on Malta the day after.

In December 2012 the band started writing for their third album. Things progressed quite well until February 2013, when Mikael Engström decided to leave the band for personal reasons. MORTALICUM however quickly decided to continue as a power-trio and after a few rehearsals they found themselves quite comfortable with the setup.

The writing process continued and they planned to start recording in May, but in April the drummer, Andreas Häggström, slipped on ice and broke his ankle. This forced the band to postpone all rehearsing and recording for almost three months. In late June they did the first rehearsal again.

September 2013 saw the long awaited start of recording the new album. In October the drum tracks were finished, in late November the rhythm guitar tracks were finished and in December most of the lead tracks were done. During January 2014 all remaining vocals, leads and bass tracks were recorded, and the album was mixed and mastered. "Tears from the Grave" was released at the end of April (precisely on April 25th 2014), like the two previous albums, by Metal On Metal Records.

Meanwhile MORTALICUM appeared at 2 festivals: Doom over Scania on March 28th and 29th in Hässleholm and Malmö respectively, where they shared the stage with SORCERER, STONEGRIFF, VOID MOON, HANDS OF ORLAC and NYMF, and Springdoom Depression VI festival on April 5th in Vienna, where they played with ATLANTEAN KODEX, STONEGRIFF, EVANGELIST and COSMIC WASTELAND.

During autumn 2014 MORTALICUM started writing songs for their fourth album, entitled "Eyes of the Demon". Rumours said it would be a slight step back towards the metal/hard rock style from their first two albums, while of course still remaining on the heavy side. The album was recorded during February-July 2015 and mixed & mastered during August. The album was released in end of November 2015.

In October 2016 they once again travelled to Malta to join the Malta Doom Metal Festival. It was their second visit to Malta and this cool festival. This time the whole set was filmed and a couple of songs released on YouTube. What will happen to the whole DVD is not decided.

In March 2018 they announced to call it a night. Andreas did not want to join the band in recording any new music. They played a last show, as it was already booked a long time before, at Doom Over Scania in Hässleholm in April 2018.

The summer passed and one thing led to another and come end of August they announced Christian Rönningen as the new drummer. The work of writing new songs has already begun, but it has been stated they will take it slow and easy.

These Swedish doom rockers have been showing the quality of their blend of doom, heavy metal and hard rock since album one, and their 4th is yet another proof of their consistency. This is not another "retro" band of re-enactors trying to give an impression they're some lost band from the '70s (and supporting it with fitting music and sound of course). For these guys it's not the image but only the music that matters, and when you hear it, it's very clear it's coming straight from their hearts (and not because they hope to get famous jumping on the bandwagon of the current retro trend). They definitely have a knack for memorable melodies, groovy riffs and damn fine guitar solos, and they perform with natural ease and finesse. As always with MORTALICUM, the production is one of the brightest points - nice organic sound that is like a balm for the ears of those who are fed up with modern plastic production. They give a nod musically toward BLACK SABBATH, GRAND MAGUS, SPIRITUAL BEGGARS, RAINBOW, TROUBLE, DEEP PURPLE, THIN LIZZY, CANDLEMASS or SAMSON, but at the same time they have the ability to put their own identity to their songs.

Mixed with good old heavy metal and some '70s hard rock, and often characterized by faster tempos, MORTALICUM's music is not doomed to be exclusively for the genre's purists and followers. Get ready for some really heavy and catchy doom metal made in the best Swedish tradition!